Twenty years ago today (as best as I can calculate), I arrived on my first visit to Hungary.

I had been sent to look into the well being of 3 young ladies from Charlottesville. They were paticipating in an exchange program between The Covenant School and Deak Ferenc Gimnazium here in Szeged. This morning I rode the tram out to grab this pic to show that the outside has changed little.

The deputy headmaster at the time was my now long time friend, Gábor. Note his sweatshirt, it was my means of identifying him upon arriving at the old airport.

Little did anyone realize that, twenty years later, I would still be investing time here, though in a  different capacity.

A lot has changed since those early years but a lot has also remained the same.

Twenty years ago, it was a lot to take in, there were far fewer cars then, and public transit was used by, it seems, more people. But I was, it seemed, driven everywhere. The trams at the time were from the 1960’s but have all been replaced with these.

Today, it appears, many, many people drive their cars and parking is the challenge, perhaps the air quality is different.

The food was amazing, but very different. That week I was fed many, mostly forgotten, new dishes. The most memorable was a cow’s stomach concoction that was very chewy, or maybe it was the mountain of pasta smothered in a crumbly cheese? But a favorite that week, as now – last night in fact – was the Szeged style fish soup which is mildly spicy (until I load it up with hot peppers) and reminds my of a Korean fish soup (that I also still love).

Cafes are an important aspect of the culture now. In fact, it seems to me that since socialism / Communism has been gone for over a generation now, there are far more cafes today. In 1997 there seemed to be two main bakery / coffee shops among my acquaintances then. It was about the ice cream really. The smaller of the two 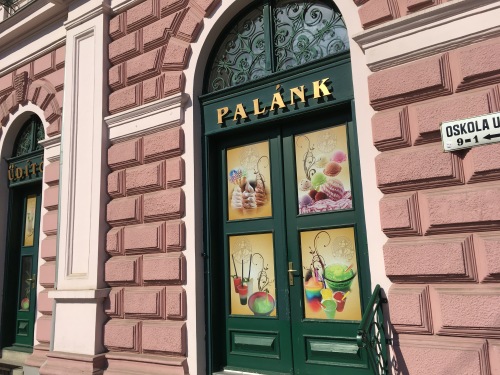 appears to have weathered the years and remained open while the much larger one, around the corner,

has closed and reopened over and again. It’s like you went for ice cream with friends to the little place and to the big one to impress someone. New then was a standing table bakery – coffee shop that spread all over town before they all suddenly closed up. My favorite became and remains this bakery-coffee shop. I stopped this morning to visit for a moment with the owner who likes to practice her English. 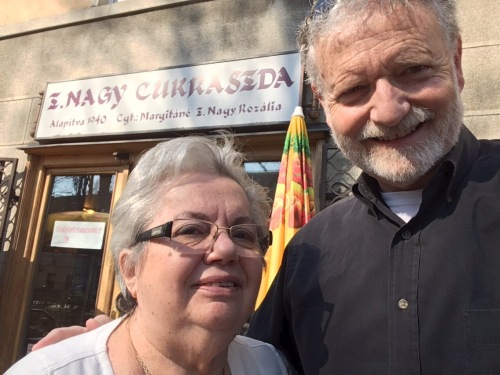 It was here at the Szeged station that I boarded my first Hungarian train toward the end of that week.

There was no clue how big a part of my traveling life these trains would become.